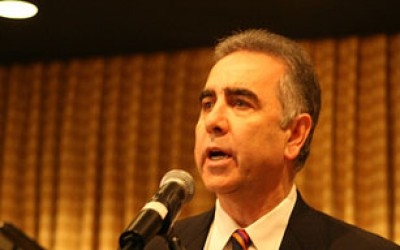 I delve this week into a thorny subject that has distressed much of the Armenian world: The uproar generated by the highly critical and harshly-worded letter posted on the internet by the Armenian Patriarch of Jerusalem Nourhan Manougian addressed to His Holiness Karekin II, Catholicos of All Armenians.

I was asked by several reputable individuals in leadership positions in Armenia and Diaspora to comment on this controversy hoping to calm down the tense atmosphere. I consented, not because I believe that my column would resolve the immediate problem, but to address the larger issues facing the Armenian nation at this critical juncture in our history.

The Jerusalem Patriarch’s lengthy letter contained two specific complaints: His understanding that at a meeting last September in Etchmiadzin, there was a discussion about converting the historic and autonomous Patriarchate of Jerusalem into one of the Dioceses of the Mother Church. The Jerusalem Patriarchate is one of the four Hierarchical Sees of the Armenian Apostolic Church, along with the Catholicosate of All Armenians, Catholicosate of the Great of Cilicia, and the Patriarchate of Istanbul. Patriarch Manougian’s letter also complained about Karekin II’s refusal to ordain Father Baret Yeretzian as Bishop, at the request of the Synod of the St. James Brotherhood of Jerusalem.

While Catholicos Karekin II and several of his Primates adamantly deny that there ever was discussion on converting the Jerusalem Patriarchate into a Diocese, some attendees of the September meeting have reported otherwise. There was a similar controversy involving the Armenian Patriarchate of Istanbul over a decade ago. Back then, Patriarch Mesrob Mutafian had also written an angry letter to Karekin Vehapar denouncing any attempt to lower the status of the Istanbul Patriarchate to a Diocese of Holy Etchmiadzin.

In response to the Jerusalem Patriarch’s Nov. 24 letter, the Supreme Spiritual Council issued a statement on Dec. 1, followed by individually-written letters by a few Primates affiliated with the Catholicosate of All Armenians, denouncing the ‘unacceptable’ tone and ‘false’ content of the Patriarch’s letter. They also expressed indignation that Patriarch Manougian had posted his letter on the internet rather than sending it privately to His Holiness Karekin II. The Patriarch had justified his decision by explaining that Karekin II had not responded to his previous letter. Ironically, the Primates castigating the Jerusalem Patriarch for posting his letter on the internet were doing the same thing themselves, further publicizing the Patriarch’s letter and fanning the flames of controversy.

The dispute over the Jerusalem Patriarch’s letter should not be viewed as an isolated incident. It is merely one manifestation of many serious, but neglected, tribulations inflicting the Armenian nation. Such high-level public controversies only aggravate our existing problems, including public distrust of leaders in Armenia and Diaspora, dwindling church attendance, declining membership in community organizations, economic crisis causing emigration from Armenia, Armenia-Diaspora disagreements, and weakening cultural identity in the Diaspora. These internal failings diminish the ability of the nation to confront existential issues, such as the security of the Armenian Republic, the Artsakh (Karabagh) conflict, Armenian demands from Turkey, survival of the Armenian community in Syria, and the preservation of the Armenian Patriarchates of Jerusalem and Istanbul.

These grave challenges, which could have catastrophic consequences for the survival of Armenia and the Armenian people, cannot be resolved by letter-writing campaigns. What is needed is a globally coordinated effort to find pan-Armenian solutions.

One possible solution is creating a democratically elected Diaspora-wide body that can truly represent the seven million Armenians throughout the world, outside Armenia and Artsakh. These Diaspora representatives, in conjunction with the leadership of Armenia and Artsakh, can claim to speak in the name of all Armenians worldwide. Whenever a crisis arises, this trio would have the authority and standing to settle all political, ecclesiastical and socio-economic discords among Armenians as well as defend the nation from external threats.

In the absence of such a worldwide elected entity, the existing Armenian Genocide Centennial Committee should be restructured so that after next April it can coordinate all significant issues with leaders of Armenia, Artsakh, and major Armenians organizations, along with some notable personalities.

It is incumbent on all Armenians to come together and resolve their critical issues before internal feuds and external perils threaten the survival of this ancient nation!